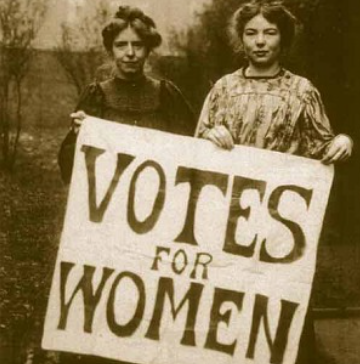 When people used to ask me if I was a feminist, I never knew what to say.

Little did I know that in 1792, Mary Wollstonecraft spoke and wrote about Rousseau’s suggestion that women were inferior to men and she was almost executed for it. Little did I know that Susan B. Anthony was arrested for voting for President Abraham Lincoln because her belief in Lincoln was not enough to trump the fact that she was a woman. Little did I know that Alice Paul’s determination and smarts led to the passing of the Equal Rights Amendment of 1920. And little did I know that Harriet Tubman was one of the fearless leaders of the underground railroad while simultaneously fighting for women’s rights. But now I know.

And now I know and now I can appreciate that Gloria Steinem used journalism and her talent to invoke emotion by preaching words of wisdom to anyone that would listen. Ruth Bader Ginsburg made and continues to make decisions preserving the equal rights for women and unrepresented peoples. That Lilly Ledbetter was deprived of thousands of dollars just because she was a woman. And that Malala Yousafzai had to fight for her life just because she wanted to go to school, and as she famously stated, “We cannot succeed when half of us are held back.”

Merriam-Webster dictionary defines the word feminist as someone who wants the same rights for women and men. That is pretty easy to agree to, but being a feminist is so much more than that. A feminist is someone who recognizes the lessons instilled in us by our society. Lessons like the fact that a woman should wear clothes that are a size zero. A size of clothing that literally doesn’t even exist. A lesson like Photoshop. Photoshop that cuts, smoothes, and draws on us to create the “perfect body”. But we both know that the woman who has that “perfect body,” has more insecurities than you and I combined. A lesson like respecting a woman who has a wedding on her finger. That ring is not just a diamond. We’ve been taught that it represents achievement that she, she has a spouse, and therefore she is superior. A lesson like calling a girl “bossy” as an insult because she knows what she wants and she’s not going to be stopped to get it. These lessons have circled and transformed the way we perceive elegance, confidence, and beauty. These lessons have changed the way I see myself when I look in the mirror. These lessons have changed how I act as young woman who is proud to be an American and is proud to be a feminist. And these lessons have created the bewildering stereotypes that “all feminists are women.” And that “all feminists hate men.”

We have been taught that a girl is someone who is expected to pick her head up. To conceal her words and emotions. To satisfy that destiny to nurture, to take that blame. To hide her body because for some weird reason people pretend to be oblivious to what’s underneath. Girls are people who need to act naive and innocent because their hardships are somehow too rough or too real for the world to bear. And a girl has the obligation to plaster that smile on her face because she will become a woman someday.

We live in a world where across the sea a woman can be queen, but for a woman to be queen in her own home she must be submissive. No, assertive. No, powerful. No, flexible. No. She must have it all. She must be able to turn that switch to be whatever is expected of her.

A woman gives you life and power, surging humanity forwards. She is the one who raises you, takes the blame for you, and makes you who you are. So, yes, I am a feminist. Now what people need to understand is that I am also an optimist. I am angry at the racism and sexism that has plagued this country for far too long. But that doesn’t mean I don’t have hope for the future. I have learned that I am lucky to live in a time where I can list ten women paving the path for me on my hands, and my grandmother lived in a time where she couldn’t. I have learned that my voice should not be saved for the sidelines, no, I should be shouting from the rooftops. I should be shouting that you who have a mother, daughter, sister, niece, aunt, or grandmother, should care that they have the same chances at success that any other human has. That is feminism.

Feminism is not about making women stronger, because let me tell you:  women are already strong. Feminism is about changing the way we perceive strength.

This oppression does not have any quick fix, and it should not be solely blamed on the male population. However I do believe that all genders have a responsibility to make a change, a change that betters the future generations, a change that erases the racist, sexist, and extremist values that have troubled this earth for centuries.

I am not a man hater. I am not a bra burner. But I am a strong woman. So I am a feminist.